In this post, we will tell you a bit about the place and what it took to get there, with a subsequent post on the places themselves.

Bhutan… we had been eyeing this remote Himalayan Kingdom for over a year, and actually planning the trip for over 8 months… This is one remote place!  We met in Bhutan with Mari’s uncles and cousins (Gilberto, Mirela, Victoria & Julia), and had a wonderful time!!!  They really travelled a very long way to get there!  We planned or trip for 7 days, and focused in the area of the west and the capital.  This is really the minimum you should do.

Bhutan and the route we took

It is worth reading a little bit about this mountain kingdom, as it really has an intriguing history, with Guru Rinpoche coming to establish Bhuddism and meditate in the mountains, a divine madman revered as prophet, a King that was elected by the people (quite unusual, right?), and many many other interesting historical facts (and fictions).  There is lots to read, but a few interesting things we found are:

Anyway… enough of information you can find in other places, on to how to get there!

A dance at the Haa Festival

Prayer wheels on the way to Tigers nest

The largest Buddha in the world

Not the TCM doctor we saw, but I wish it was

Part of the family at the Haa festival

The view of Paro Valley from Paro Dzong

Planning a journey to Bhutan is not a very difficult job. This is because all travel there is regulated by the government, so everything has to be done through a registered travel agency. All of them have a set of standard routes, which are quite spectacular, but you can feel free to move it around as needed. We found the Bhutanese to be quite helpful and accommodating. In the past, there used to be visa quotas to get into the country, but that was changed a few years ago as the country wants to develop tourism more. They still control access quite highly, and manage the volume of tourists by making the trips relatively expensive.

There is a set price of somewhere between 220 USD and 250 USD per day per person, depending on the time of year, and this includes everything except tips and additional drinks. You get a 3-4 star hotel, meals, a tour guide, driver entrance fees to wherever you go, permits, etc.  All in all, it is an expensive proposition, but not as bad as it sounds once you factor everything in.  The money needs to be payed up front, and is payed to the government, which apparently only releases it to the travel agency once the trip is completed… as you can see, quite controlled.  Nevertheless, the country seems quite interested in bringing more people over, and have a favourable view of the coup try outside of it.

The travel agencies advertise quite heavily all of the festivals (there is basically one per month, each in a different city) as a way to experience the Bhutanese culture.  We went to a smaller one of these, and found it to be interesting, but not the highlight of the trip. The best part of it is without a doubt the amazing and breathtaking scenery.  You really can not believe the views…  as you travel across valleys (and probably get a bit dizzy with all of the winding roads), it is just one magnificent view after another.  The country has a law where they can not have less than 60% of the national territory as forest (and my understanding is that currently it is close to 75-80%), so no matter where you go, all you see is spectacular mountains covered in green.  From our limited experience, it seems like the locals are doing a good job about keeping their country in a green state (they say that they are the most carbon negative country in the world).

A monk at the prayer wheels

A view inside Punakha Dzong

There are quite a few cities and monasteries that can’t be missed, but Bhutan is also well know for the different treks that can be done, including the infamous snowman trek, a 27 day affair that is considered one of the worlds toughest.  We stayed mostly in the cities and towns but did do a one day trek up to see the famous Tigers Nest monastery (this is probably the one thing in any trip to Bhutan that CAN NOT be missed). We will tell you more about all of those places in the next couple of posts.

Wrapping up this very long post, we found Bhutan to be an incredible place, with amazing nature and scenery, and kind, helpful people.  This is definitely a highlight of the Himalayan region, and we recommend to go there without reservation.

A view of Haa valley

Here is a snapshot of our route, to read about Paro and Haa, click here. To read the final part, Thimpu and Punahka, click here. 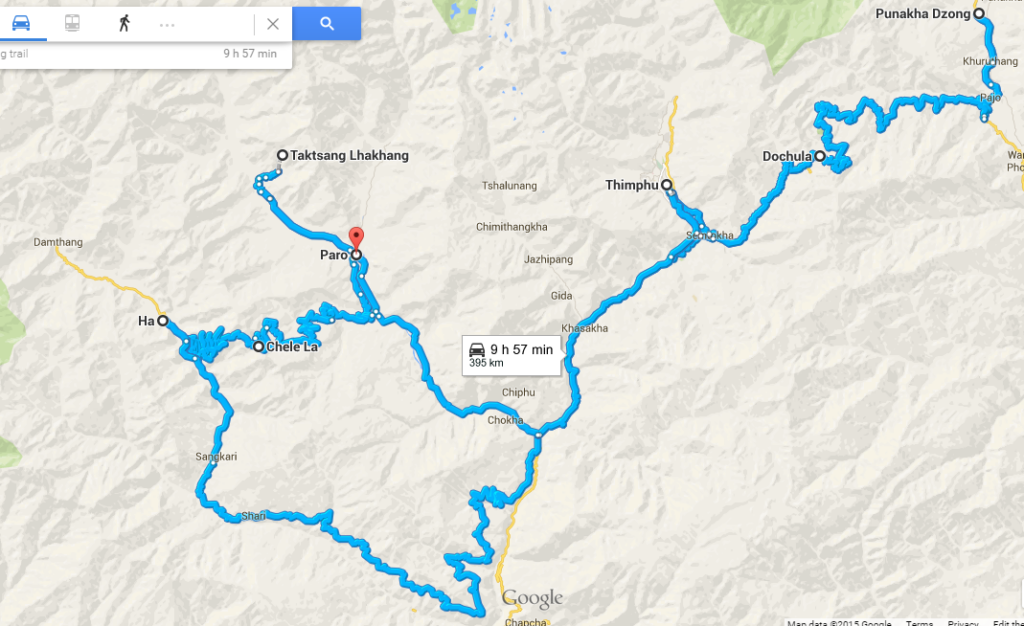